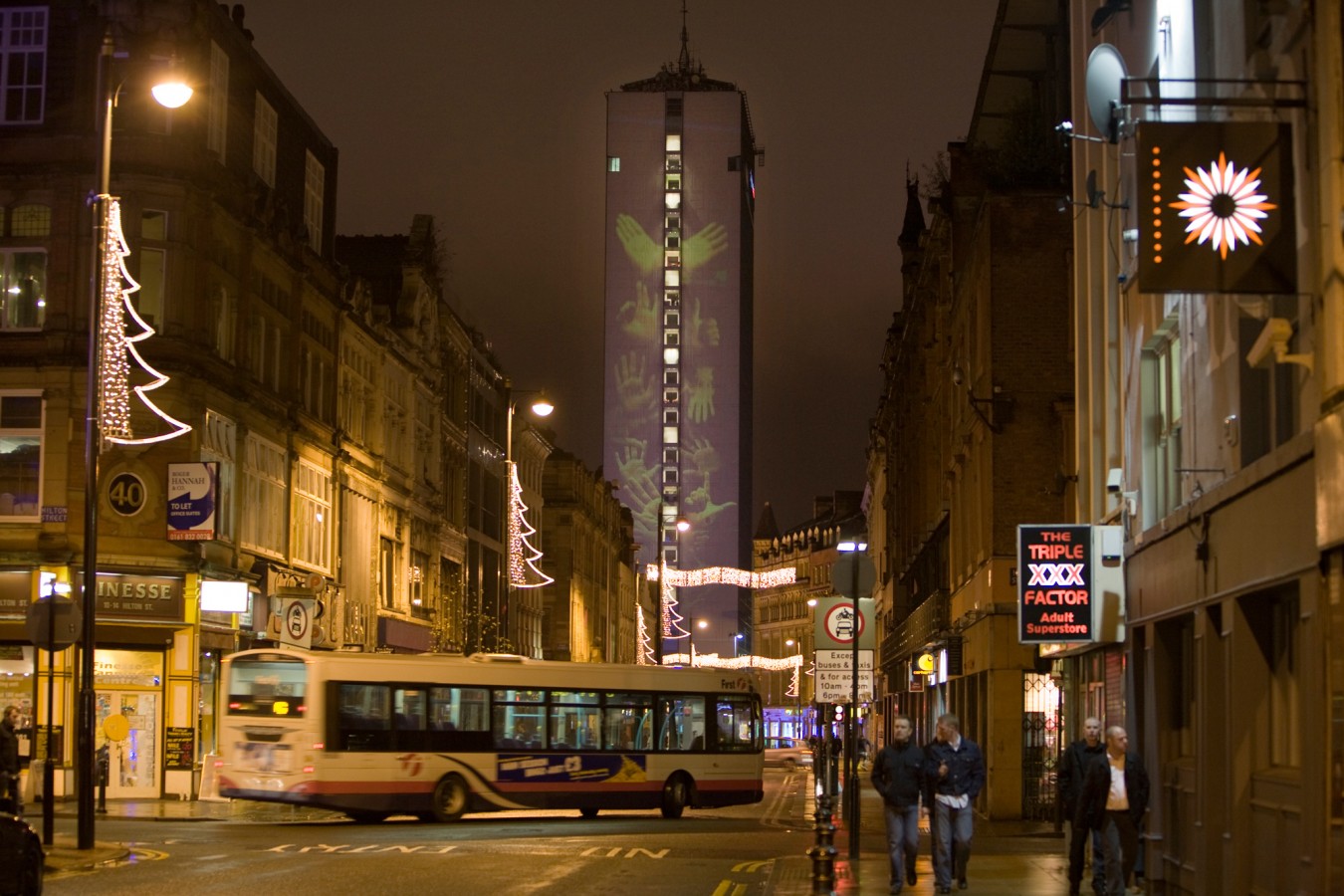 One of Manchester’s most distinctive buildings – the 107 metre tall City Tower in Piccadilly Gardens – became a huge, open canvas from Friday 12 – Sunday 14 December (4pm – 11pm), when passers-by where invited to leave giant handprints on the side of its imposing tower.

Participants scanned in their hand, saving the image and choosing where their print will be projected onto the landmark structure. Once in the system it appears above the heads of commuters and shoppers in the area below and can be seen for miles around. They also received a code to access images of their handpint online (see gallery section)
From my perspective as the artist behind the project, as a piece of public art Handprint worked much better than I expected. The scale was truly inspiring and the public interaction was without exception very positive and had the visceral connection I intended.

Another important aspect was the marketing, branding and promotion of the piece. This had obvious benefits to the project drectly but was of more significant importance to the sponsors who’s remit is to promote the area and bring interesting artistic and cultural events to a part of the city that is sometimes overlooked. Again this was very successful with widespread coverage in local web, print, radio and TV media. Helped by a strong brand and support of PR professionals.

Handprint crossed all boundaries. By being different meant people had no point of reference to have an opininon about it or any natural behaviour to react to it. This meant we got a complete cross reference of people.

So although we found a lot of people where initially defensive when asked to participate as soon as they got involved in the process, which was very quick (5 – seconds from putting their hands in the kiosk and seeing and manipulateing it on the side of the Tower) Without exception peoples attitudes changed and we got a variety of positive responces.

One example of the accessibility of the project was when a group of loud teenage girls approached us for cigarettes. We instead invited them to have their hands projected onto the City Tower. As usual they where a bit suspicious but as soon as one of them had their hand projected. Their whole attitude and behaviour changed from aggressive to completely open and friendly this in turn created a really great atmosphere. In addition they began to get more creative and after the initial scans started writing their names (in reverse) on their hands. They then disappeared and quickly returned with a large marker pen to create increasingly bolder signatures.

Another example was when we where approached by two architects who where amazed how the installation completely altered the presence of the building and made them consider how techniques like this can add a completely new dimension to the architecture of a building.